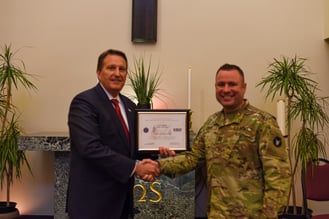 Minneapolis, MN: The Employer Support of the Guard and Reserve, ESGR, presented Scott Riddle, CEO and President of Walker Methodist, with their Patriot Award. The Patriot Award reflects efforts to support citizen servicepeople through a wide range of measures, including flexible schedules, time off prior to and after deployment, care for families, and leaves of absence as needed.

Riddle was nominated for the award by Captain Kevin Coder, Director of Spiritual Life at Walker Methodist and Chaplain in the Minnesota National Guard. Coder recently was offered employment at Walker Methodist. However, prior to starting, he learned of an upcoming deployment. Coder notified Walker Methodist’s CEO and was overwhelmed by the outpouring of support.

Said Coder, “Upon learning the news that I would be deploying for several months, Scott responded quickly with his desire to honor my employment offer with Walker Methodist. His support has been stalwart. In fact, he approved additional hiring and temporary department restructuring to accommodate my absence.”

Walker Methodist has many career opportunities and welcomes all service men and women. Due to our rapid growth, we have frequent openings in nursing, culinary, resident services, life enrichment, and several other areas.